Leading off with 3 things:

Well, well, well. Look who decided to show up! I made it back. Guys, I hate that I’ve slacked on blogging for the past month.

You want to know the worst part? … I had a blog all written Sept. 7. Ready to publish. But my husband had just walked in the door from a long day of work, I wanted to proofread and fine-tune one more time before I posted, so I thought “I’ll just leave this puppy in drafts and go back to it tomorrow. One day late isn’t so bad.” I know better.

I’m really big on doing what I say I’m going to do. I’m also a touch OCD (see photo below) and I’m big on routines. After 33 years, I know myself, and I know once I fall off a wagon, I have a damn hard time climbing back on. (See any recent photos of me where my Ohio eating and drinking has weighed me down, big time!)

So when people ask me about my dedication and commitment to things … it’s maybe more of a stubborn, OCD thing than an iron will. And now that I think about it, maybe that’s why so many of my gym friends in WV had a touch of the OCD?

Anyway – here’s MY question for anyone who’s reading: How do you make yourself do things you know you should be doing? A lot of people ask me this, and my answer is “I just do it,” but at least with working out, I know it makes me feel better when I do it and I think it’s pretty deeply embedded into my routines. I’ve had to get a lot more flexible lately and do DVDs at home or put in time on the treadmill, but I do something almost every day. Two hobbies I know I need to put more time into: knitting and playing guitar. I like to do both. I’m not great at either. I just very rarely pick up the tools and get to work, and I really don’t have a good answer. I don’t want this blog to be the third thing I frequently think “I should sit down and do that,” and the only way I know to stop that from happening is to just do it!

So let me dust off the blog I had worked on for Sept. 7. It was the idea that popped out on my keyboard, completely unplanned, after spending that day wondering “what do I have to write about?” The suggestion from my dear high school friend Nick Nash, a guy who’s way more local famous than I am, but he keeps it super low-key.

Nick asked me to weigh in on his fashion choices from high school, so we’re talking 2000-2002. He’s also curious if it could have any affect on a potential political career. So let me first say, dude, I’m not going to fish out old pictures to try to scan, but you definitely had a look back then … that may not lend itself to garnering votes right now. I don’t think anybody digs back into high school fashion choices when they run campaigns (or counter-attacks), but I also don’t know if West Virginia voters are ready to put their trust in a former emo kid, despite how friendly and awesome you were in 2001. It’s more of an overall image thing, my man. But, people our age are getting elected to public office just fine, so maybe I’m thinking too conservatively.

Our generation, I think, is when Goodwill shopping started to become a thing, so you weren’t alone in your ironic fashion choices, Nick. The Huz & I have been watching a lot of “Fresh Off the Boat” on Hulu, and it’s so 90’s-tastic. I love it so, so much. We actually watched the episode about JNCO jeans last week. Two years ago during a gathering of high school friends, our fashion choices came up and several agreed these were comfortable jeans they wished they still had. I never had any. Never really appealed to me, but I respected all my friends (male and female) who loved them. Maybe people would understand and sympathize!

I don’t think the early ’00s are ready to come back around quite yet, though. Almost. I think it was Jeff Foxworthy who told the joke that you can tell what your parents’ best decade was because their fashion never leaves it. Nick, I know you’re not still wearing red pleather pants and T-shirts from Hot Topic, but I am a little curious if your clothing choices will change when we start seeing the awful, ugly fashion choices of 2002 come back around.

Almost any time you analyze politics, there’s some brief mention of fashion choices – from tie colors to lapel pins. “Was he dressed down enough for flood cleanup?” Sooooo, yeah, Nick. What you wear now kind of matters. What you used to wear … you may be safe. But I’m working mostly from home (or Panera or Starbucks) which means I’m living in yoga pants, so what good is my advice? That leads me to my first encounter this week with Le Tote – a sort of clothing rental company. 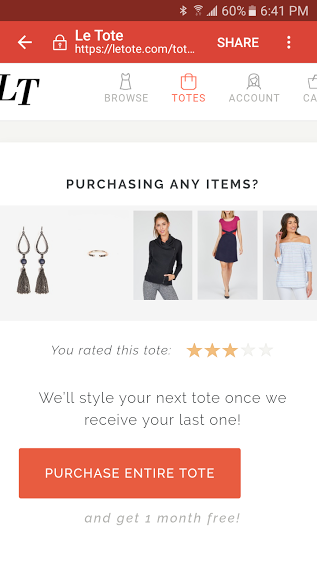 Yep, it’s like the Netflix of clothes. You pay a monthly fee and you get clothes and accessories shipped to you as fast as you can wear them and ship them back. You can rate things and “heart” things to improve what Le Tote picks for you, and you can look at what they pick for you and swap items before it actually ships. You don’t even have to wash the clothes before you mail them back! And you can buy things from your Tote if you love them, but you don’t have to. So I’ve been wanting to try this for over a year. I thought I was “seen” at events enough that I needed a rotation of new clothes and maybe this would be cheaper? easier? than buying, but I couldn’t ever justify the cost. Flash forward to now. … I’m not spending as much on my gym membership, I’m starting to need to attend a variety of events for work … And, maybe the real clincher: Not many of my clothes fit right now.

After going through the motions on the site, I was in their system and started getting emails tempting me. The one offering 75% off my first Tote did me in. Here’s what I got – I didn’t LOVE anything, but boy was the presentation nice.  All wrapped in tissue with a little brochure that read “Dear Ann” on the front and had the low-down for all my items inside and what they would cost if I bought them. My off-the-shoulder top is a little tight in the arms, the super cool motorcycle sweatshirt jacket is a little bunchy, and the dress is a tad short, but I’m going to wear it Friday for work. I’ll keep y’all posted on how my Le Tote relationship goes … if I see any opportunities to add JNCO to my Tote, and hopefully I’ll renew my dedication to the blog world!

I'm a former journalist and political commentator learning to love living in the Columbus, OH area after spending my entire life in West Virginia. I'm a wife, a cat mom, Rotarian, Type A Pittsburgh enthusiast. View all posts by AskAnnAli

What do you want to Ask Ann Ali?

If you have a question, an idea, a suggestion or some feedback, please help me make this a two-way conversation. Find me on Twitter or Facebook, leave a reply or use the “Contact” link for an automated message.